Today I am going to show how to get AVRO data from a schema aware Confluent Cloud cluster into Apache Druid. Use the Druid 0.22 micro-quickstart setup for this exercise.

Data Governance in Kafka and Druid: Enforcing a contract

Apache Druid can natively consume data out of a Kafka topic. It is also flexible in picking up new dimensions as they show up in the stream, and can even do so automatically to a certain extent.

Likewise, on the lowest level, Apache Kafka just transmits the message content as a blob of data and does not care what’s in it. However, in a microservices architecture sometimes a stricter control of the data format is desirable. For this, Confluent developed Schema Registry as an extension to Kafka. It is now possible to encode messages in the binary AVRO format. (You can also use JSON or Protobuf with Schema Registry, but that’s a story for another time.)

An AVRO object is always accompanied by a schema definition which is itself written in JSON. In the simplest case, the schema definition is sent along with the binary data in each message, which mostly negates the advantages of having a highly compressed binary format.

Therefore, if you use AVRO with Kafka, each message is prepended by a schema ID that references an entry in Schema Registry. Clients can validate schema conformance of each message and make sure that contracts are honored. The exact binary format is documented here.

Druid can read and parse AVRO messages and their schemas. With this integration, Druid automatically picks up the schema definition and allows us to configure the ingestion spec accordingly.

Setting things up in Confluent Cloud

For this tutorial, I am assuming you have a Confluent Cloud account, as well as an environment and a cluster to work with. We need to set up a few things here:

For this tutorial, create a topic tut-avro with default settings. (We are only using little data, so there is no point in tuning the configuration.) You can do this in the GUI using Topics > Add topic.

Navigate to Data integration > API keys > Add key. You will be asked whether your key should be allowed global or granular access:

If you select that last option, you can either use an existing service account, or create a new one. Create a new service account and name it tut-avro-service-account. Add two ACLs to the service account so that the account can read and write the topic tut-avro that you just created. Finally, download the generated API key and secret for later use. Also, note down the Kafka bootstrap server URL. You can find it if you go to Data integration > Clients > New client > Java.

Once again, download the API key and secret you just created.

Select CLICKSTREAM from the Quickstart menu, enter a message interval of 500 msec, and set the number of tasks to 1 - this will be enough for the experiment: 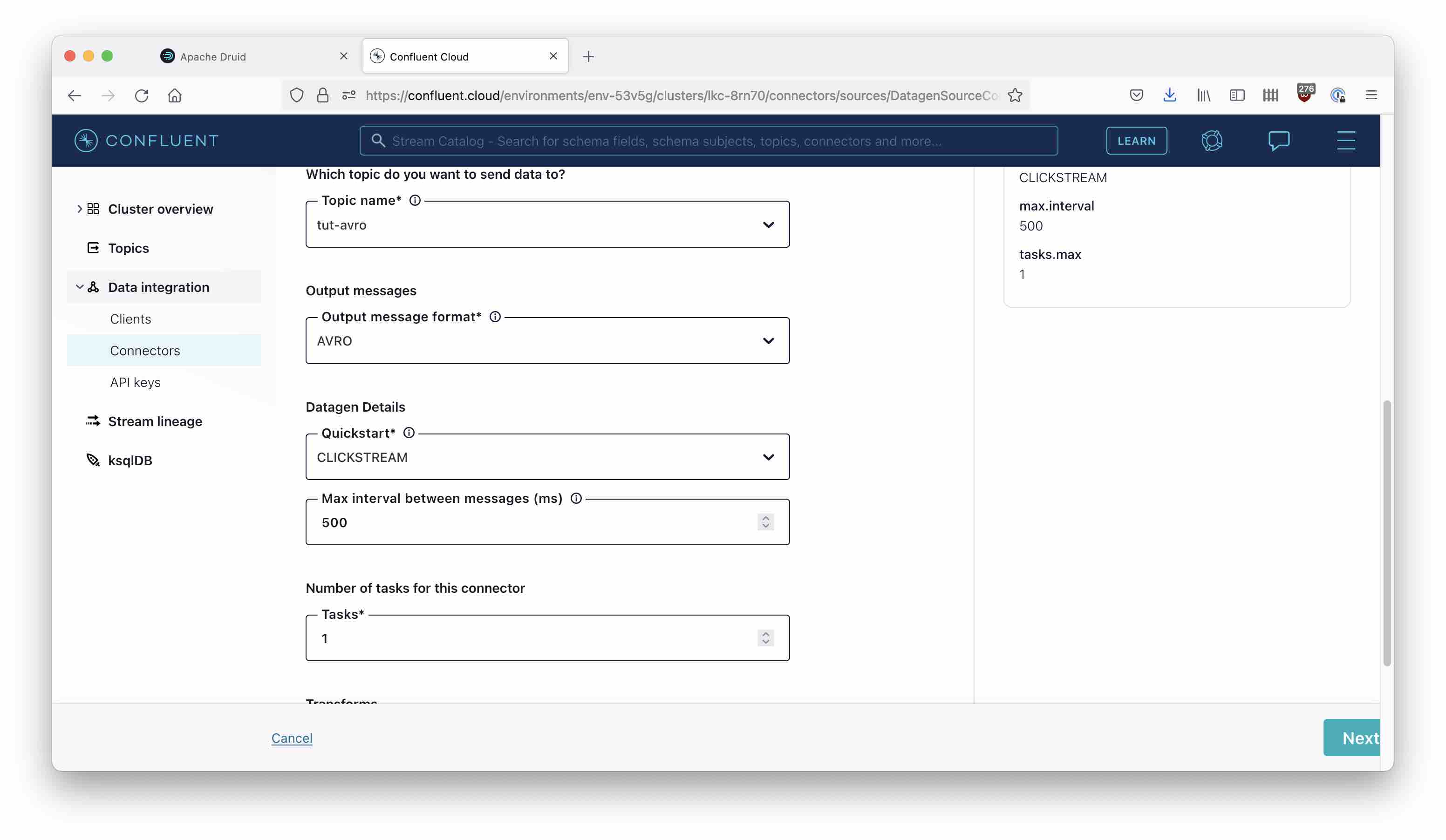 Start the connector and wait a moment until the topic begins to receive data. If you have everything configured, you can peek into the topic in the Confluent Cloud GUI and verify that data is arriving.

First attempt to ingest these data into Druid

In Druid, start the ingestion from the console.

Since Confluent Cloud secures access to Kafka, you need to paste the consumer properties into the little window in the wizard

This will automatically populate the bootstrap server field too. Enter tut-avro as the Kafka topic name and hit Apply. Druid does its best to give you a preview of the data but since it’s a binary format the result looks like gibberish. 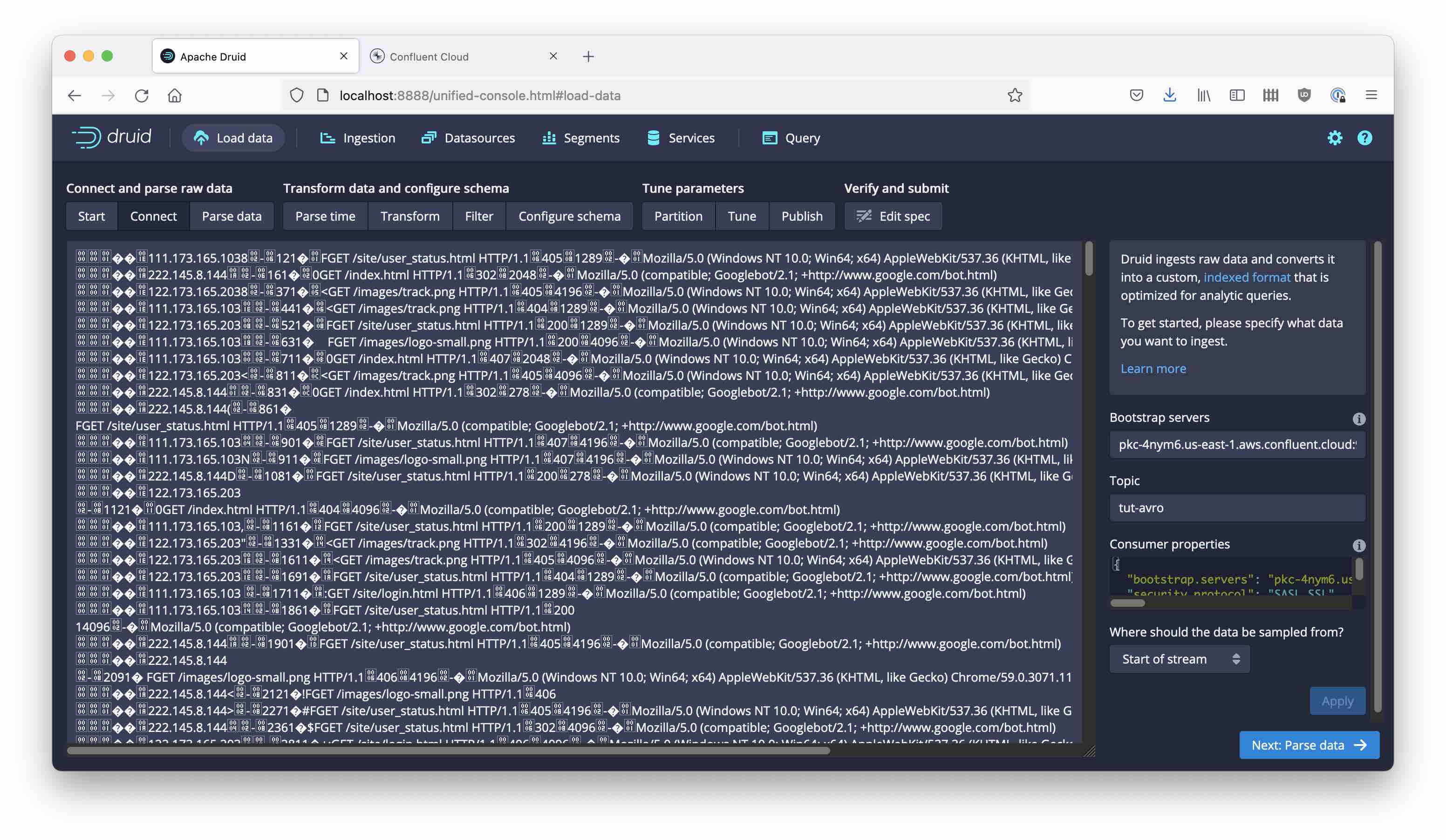 Press Next: Parse data, and select the avro_stream input format. This didn’t used to be supported by the Druid wizard, but the ability to parse Avro streams directly from the GUI was recently added.

But what?? … We get the message Error: Failed to sample data: null. This is because Avro needs a schema and we haven’t specified one.

We need to tell Druid where to find the schema associated with our Avro data: Navigate to Edit spec to the right 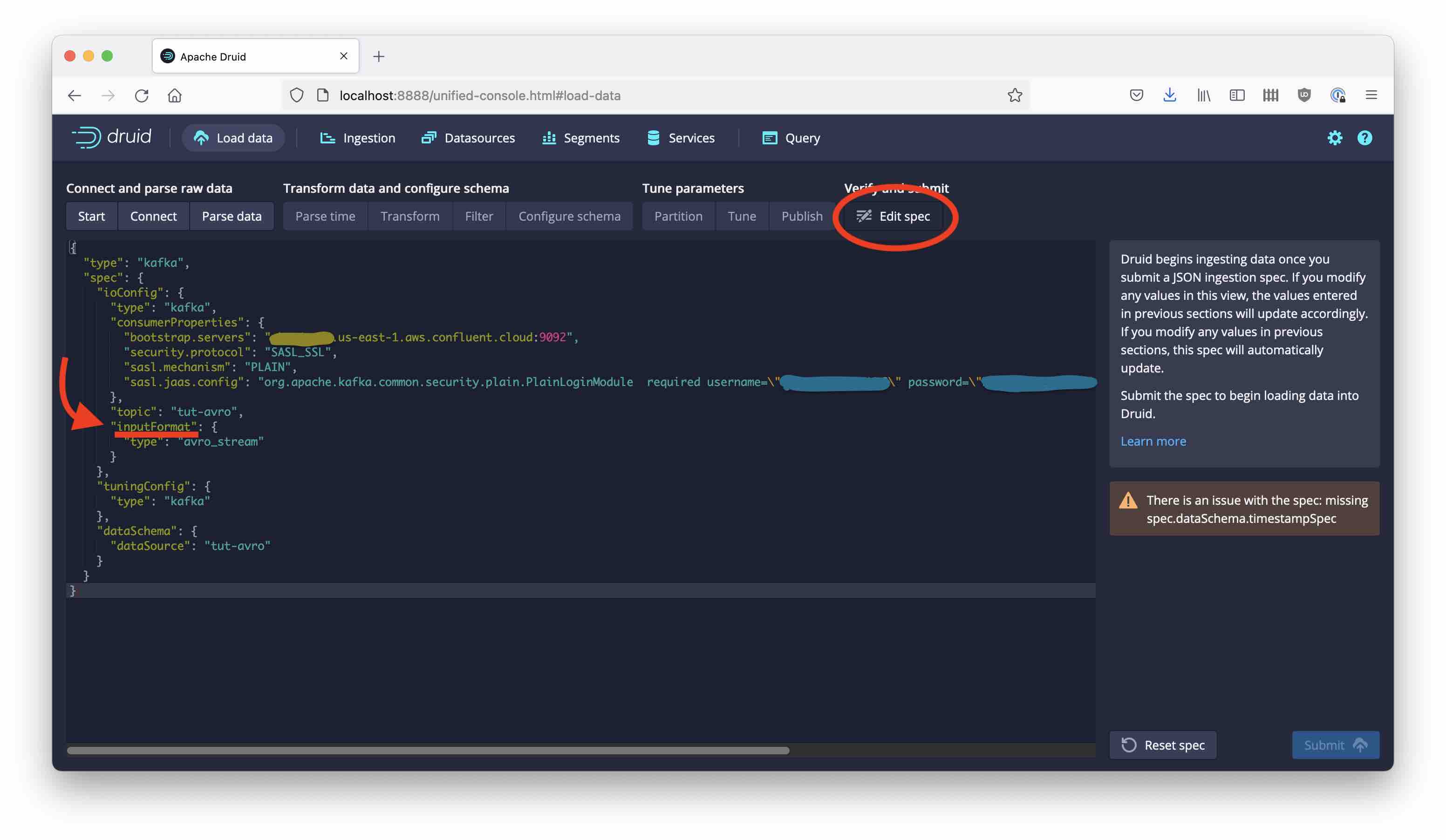 and find the inputFormat section. Replace this by the following snippet:

replacing the placeholders with the appropriate credentials for your instance of Schema Registry. Then go back to the Parse Data stage. 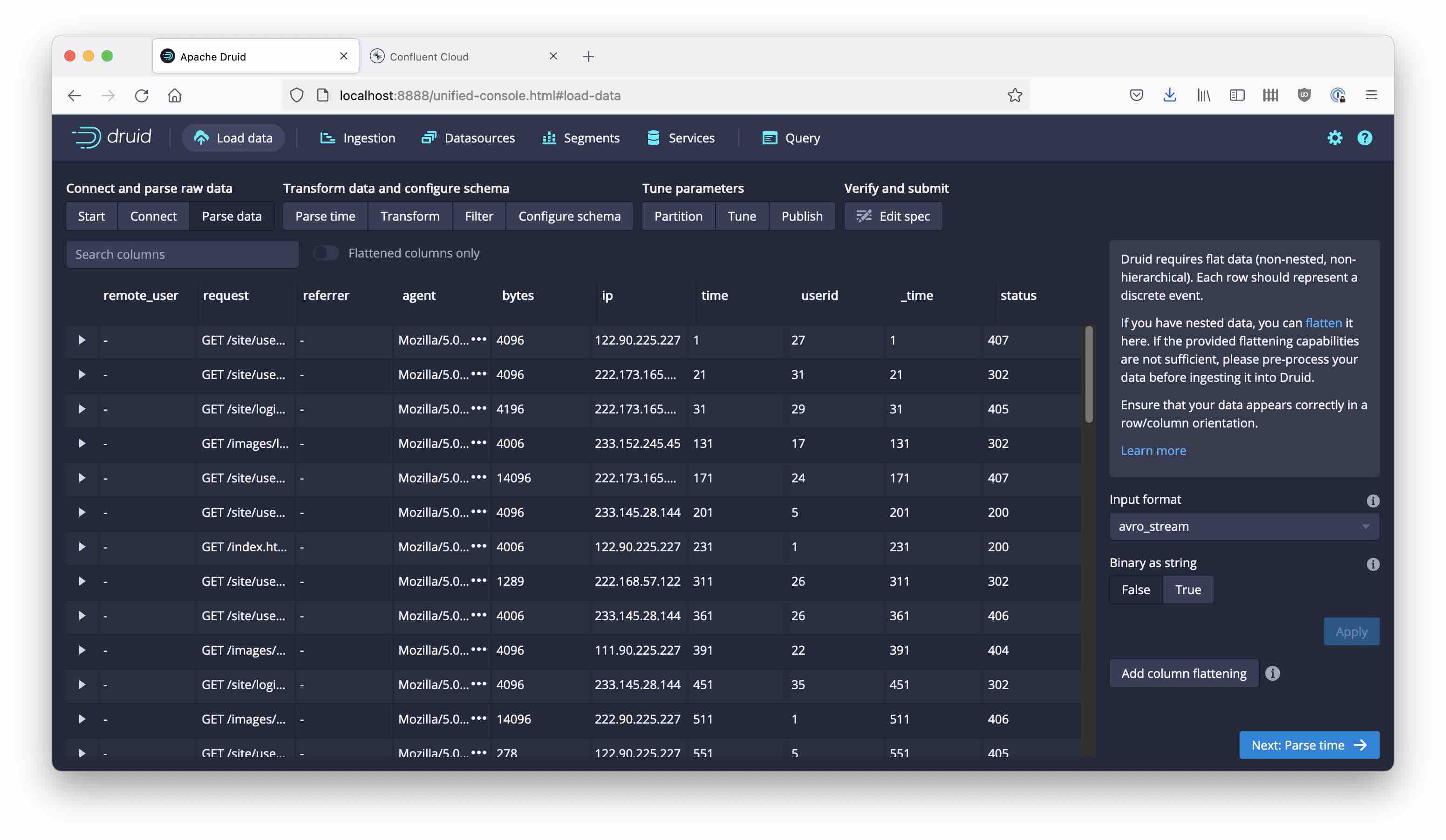 This looks much better!

From here, the rest is easy. Pick the time field as primary timestamp; this comes as seconds since the connector was started, so in a real world scenario you would want to add an offset, but for this tutorial you can leave it as is and interpret it as seconds since Epoch, creating dates in 1970. Submit the spec, and after a short while you will see the first data coming in:

That’s it! We have just integrated Druid with Confluent Schema Registry.